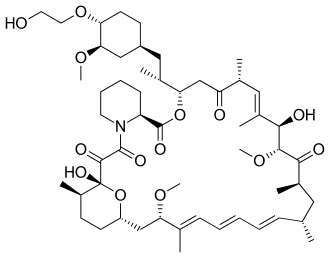 Everolimus (INN) (/ˌɛvəˈroʊləməs/) (earlier code name RAD001) is the 40-O-(2-hydroxyethyl) derivative of sirolimus and works similarly to sirolimus as an inhibitor of mammalian target of rapamycin (mTOR).

It is currently used as an immunosuppressant to prevent rejection of organ transplants and in the treatment of renal cell cancer and other tumours. Much research has also been conducted on everolimus and other mTOR inhibitors as targeted therapy for use in a number of cancers.

It is marketed by Novartis under the trade names Zortress (USA) and Certican (Europe and other countries) in transplantation medicine, and as Afinitor (general tumours) and Votubia (tumours as a result of TSC) in oncology. Everolimus is also available from Biocon, with the brand name Evertor.

In a similar fashion to other rapalogs, its effect is solely on the mTORC1 protein complex, and not on the mTORC2 complex. This can lead to a hyper-activation of the kinase AKT via inhibition on the mTORC1 negative feedback loop, while not inhibiting the mTORC2 positive feedback to AKT. This AKT elevation can lead to longer survival in some cell types. Everolimus has important effects on cell growth, cell proliferation and cell survival.

Everolimus binds to its protein receptor FKBP12, which directly interacts with mTORC1, inhibiting its downstream signaling. As a consequence, mRNAs that code for proteins implicated in the cell cycle and in the glycolysis process are impaired or altered, and tumor growth is inhibited.[15]