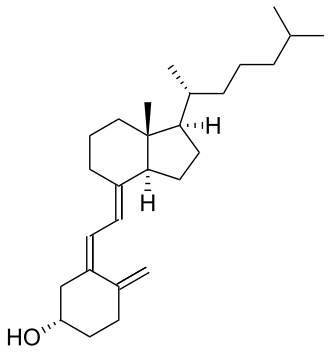 Cholecalciferol, also known as vitamin D3 and colecalciferol, is a type of vitamin D found in food and used as a dietary supplement.[1] As a supplement it is used to treat and prevent vitamin D deficiency including rickets.[2][3] It is also used for familial hypophosphatemia, hypoparathyroidism that is causing low blood calcium, and Fanconi syndrome.[3][4] It is taken by mouth.[4]  Vit D3 is a secosteroid, that is, a steroid molecule with one ring open. Cholecalciferol is inactive: it is converted to its active form by two hydroxylations: the first in the liver, the second in the kidney, to form calcitriol, whose action is mediated by the vitamin D receptor, a nuclear receptor which regulates the synthesis of hundreds of enzymes and is present in virtually every cell in the body. After being converted into 1,25-dihydroxyvitamin D, it works by increasing the uptake of calcium by the intestines.[5] Food in which it is found include some fish, cheese, and eggs.[7]