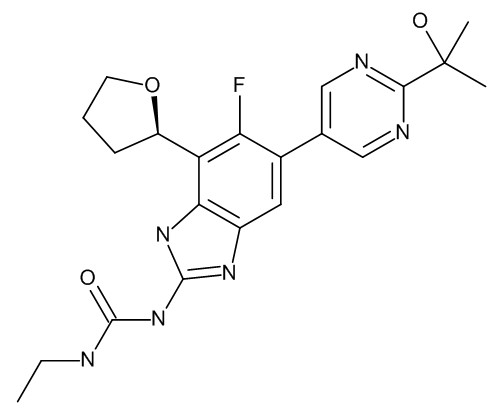 Background:The emergence of multidrug resistant (MDR) and extensively drug resistant (XDR) strains of M. tuberculosis (Mtb) has made TB control difficult worldwide. New drugs are urgently needed. SPR720 (SPR) has been shown to be as active as moxifloxacin (MOX). The goal of this study was to compare the sterilizing activity of SPR in a regimen with rifampin (RIF) and pyrazinamide (PZA) to MOX with RIF and PZA. SPR720 is an orally bioavailable prodrug of SPR719, an aminobenzimidazole inhibitor of gyrase B/ParE with broad spectrum antibacterial activity. Spero Therapeutics is developing SPR720 for the treatment of infections caused by non-tuberculous mycobacteria. Methods:Six-week old female BALB/c mice were infected with 3.24 Log10 CFU of Mtb Erdman (ATCC 35801) via aerosol delivery. Treatment started 3 weeks post-infection and was delivered by oral gavage 5 days per week. At treatment initiation, 6 mice were euthanized to determine the infection load. A drug control regimen consisting of INH (25 mg/kg), RIF (10 mg/kg), and PZA (150 mg/kg) (INH/RIF/PZA) was administered for 16 weeks. There were two regimens that contained SPR at 100 mg/kg, RIF at either 10 or 30 mg/kg, and PZA at 150mg/kg (SPR/RIF10/PZA and SPR/RIF30/PZA). These two regimens were compared to MOX (100 mg/kg), RIF (10mg/kg), and PZA (150 mg/kg) (MOX/RIF/PZA). The SPR and MOX regimens were administered for either 8 or 12 weeks with 14 mice in each arm of the experiment. Six mice were euthanized at the completion of therapy and 8 mice in each group were left untreated for an additional 12 weeks to measure the level of reactivation of Mtb following treatment completion. Six mice left untreated were euthanized at the 8 week timepoint to determine the infection load.

Results:The mice were infected with 7.68 ± 0.38 Log10 CFU Mtb at the time treatment began. No detectable colonies were recovered after 16 weeks of INH/RIF/PZA or 8 and 12 weeks of SPR/RIF10/PZA, SPR/RIF30/PZA, and MOX/RIF/PZA treatments. After 12 weeks post-treatment, there was Mtb regrowth observed in all groups with the exception of SPR/RIF30/PZA given for 12 weeks. There was more regrowth observed in the 16-week INH/RIF/PZA regimen than the 12-week SPR and MOX regimens. No differences in regrowth were observed between the SPR/RIF10/PZA and MOX/RIF/PZA groups at 8 and 12 weeks.

Conclusion: SPR was as effective as MOX in combination regimens with RIF and PZA. SPR combined with increased doses of RIF might be a better regimen to treat drug-susceptible TB and for XDR TB infections, SPR would be a viable option in second-line drug regimens.

CAMBRIDGE, Mass., June 20, 2019 (GLOBE NEWSWIRE) -- Spero Therapeutics, Inc. (Nasdaq:SPRO), a multi-asset clinical-stage biopharmaceutical company focused on identifying, developing and commercializing treatments in high unmet need areas involving multi-drug resistant (MDR) bacterial infections and rare diseases, today announced that it entered into a collaboration with the Bill & Melinda Gates Medical Research Institute (Gates MRI) to develop SPR720 for the treatment of lung infections caused by Mycobacterium tuberculosis (Mtb), an indication that is designated as a critical concern by the World Health Organization (WHO).
SPR720 is an orally administered antimicrobial agent currently being developed by Spero Therapeutics for the treatment of rare non-tuberculous mycobacterial (NTM) infections.  Spero has granted Gates MRI an exclusive license to develop, manufacture and commercialize SPR720 for the treatment of tuberculosis (TB) in low- and middle- income countries (LMIC).  Gates MRI will conduct and fund preclinical and clinical studies for the development of SPR720 against TB, and also fund certain collaborative activities in furtherance of Gates MRI’s charitable purposes.  SPR720 was discovered by Vertex Pharmaceuticals and was acquired by Spero Therapeutics in 2016. Vertex and Spero have reached an agreement to enable the collaboration between Spero and the Bill & Melinda Gates Medical Research Institute for the further development of this compound in low- and middle-income countries.

DNA gyrase is a highly conserved topoisomerase composed of two subunits, GyrA and GyrB, and is critical for bacterial DNA replication. Quinolones target the GyrA subunit and GyrB inhibitors, some with anti-mycobacteria activity, have been reported, but none have yet reached the market. Data show efficacy for two GyrB inhibitors, SPR720 (formerly pVXc-486) and SPR750, in a murine chronic Mtb infection model.  Treatment with SPR720 at 100 mg/kg administered twice daily was effective in this chronic infection model with a 2.5-log CFU decrease compared with early controls. This CFU decrease was similar to that of moxifloxacin and isoniazid in this study. SPR750 exhibited more modest activity with a 1.0-log decrease of CFUs. PK analyses showed good dose-proportional exposures after oral administration. Conclusions: Treatment with GyrB inhibitors, SPR720 and SPR750, showed efficacy in a murine chronic Mtb infection model. These data suggest that future studies are warranted to determine if they could replace quinolones in MDR/XDR drug therapy regimens.